I am excited to announce that I’ll be doing an online launch for REBEL SPY with the brilliant Tamara Ireland Stone on Wednesday, June 24th at 7 PM PST!

This event is especially meaningful for me. Tamara and I have been friends for a long time, and I told her about REBEL SPY over lunch a few years ago when it was just the seed of a story. We’ve supported each other through the years, and I’ve loved to see her incredible ideas develop into novels. What’s better than a dear friend with whom you can share one of your greatest life’s passions? Not much.

It’s also a meaningful event for me because it will be hosted by my local independent bookseller, Rakestraw Books. Rakestraw has hosted me through the launch of

every single one of my novels. I’m so fortunate to have a great place to buy books a stone’s throw from my home–and to have their support in turn.

To sign up for the launch event, please go here. I hope to see you there!

at Rakestraw after the launch of UNDER THE NEVER SKY

Looking for a signed, personalized copy of REBEL SPY? I’ve got ya covered!

My local independent bookstore, Rakestraw Books, and I would love to make it happen. Order here.

I’m also really excited to offer one-hour Zoom chats to book clubs that preorder six or more copies through Rakestraw Books. Please use the coupon code SPY20 when checking out.

This will be a limited offer, so order soon. I will work with you to schedule a convenient time to conduct the chat.

I hope you’ll consider signing up. I’m really looking forward to chatting with you, and your book club about books, writing, life as an author, and whatever else you’d like to discuss!

First REBEL SPY trade review in and it’s a great one! I am so thrilled to share this review from Kirkus.

My fair lady is a spy.
Living under the thumb of her abusive stepfather, sea-wreckage diver Frannie Tasker finds a crafty way to escape after a boat trip in the Bahamas, shortly after her mother’s death in the summer of 1776, ends in tragedy. A day of wrecking turns into a thunderous and violent night in which another ship sinks and a young woman drowns, giving Frannie an opportunity to flee. Frannie assumes the petticoats, gown, and life of the late Miss Emmeline Coates and boards the Ambrosia, tricking the crew into bringing her to New York. Little does she know that her subterfuge would lead to a new life of wealth and luxury, espionage and danger. Convinced by her reading of Thomas Paine’s Common Sense while sailing to Manhattan, the heart of the American Revolution, Frannie becomes a spy for the patriots. As a lady with access to some of the crown’s highest officers, Frannie gathers a wealth of information and passes it along to George Washington’s network. Endangering her freedom, life, and reputation by serving as an asset for the patriots, Frannie risks it all. Rich in historical detail and inspired by a true story, daring and courageous Frannie, code name “355,” does her bit for the American Revolution. Frannie is white, her mother was an immigrant from Spain, and she is portrayed as a supporter of abolition.
A riveting read. (author’s note) (Historical fiction. 12-17)

I’m thrilled to share the cover for REBEL SPY! What do you think?

I love it, and can’t wait to share it with readers. It’ll be published June 23, 2020, so preorder through your favorite book-retailer and mark your calendars 🙂

This is my first historical, based on one of America’s first female spies who was active during the Revolutionary War. To date, History (ahem, or Herstory) only knows her as “355,” a code that translates to “lady.” REBEL SPY is my fictional interpretation of who 355 was, using the little existent information we have of her as a springboard.

Writing this novel was a three-year labor of love, and I’m so proud of it. I really hope you love it, too. 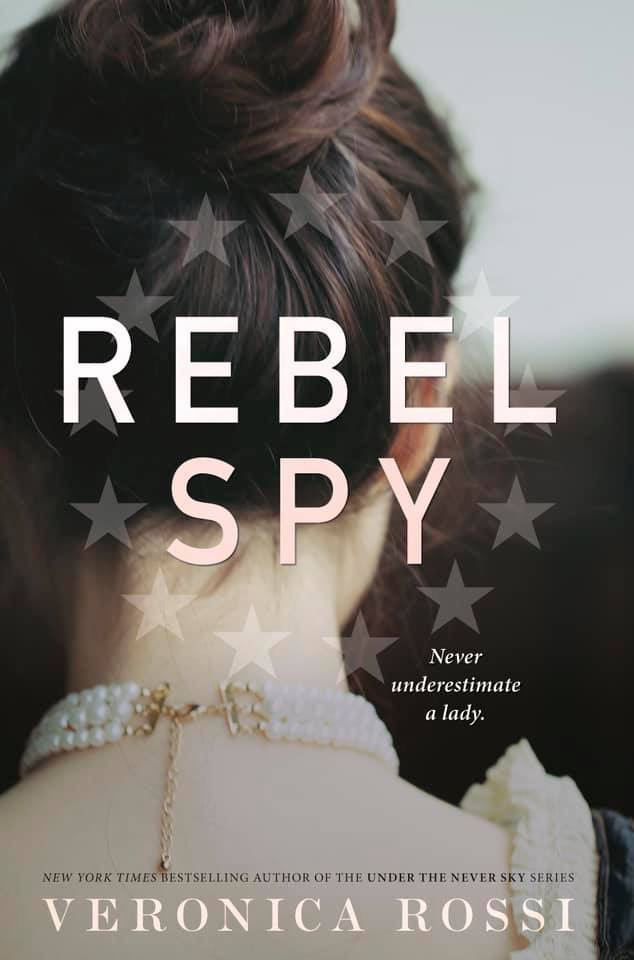 Very excited to share this! My first historical, which will be published by Delacorte! This one is close to my heart. Can’t wait for you to read it! 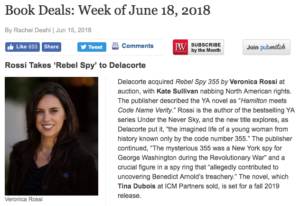